Christina is a doctoral student at the Columbia University School of Social Work who conducts policy-relevant substance use and HIV prevention research tailored to the developmental context of adolescents and young adults. Her research explores social determinants of substance use and sexual risk behaviors, and the ways in which public health laws and policies may serve as structural drivers of HIV transmission for young people.

Christina has extensive clinical and epidemiological research experience focused on substance use and co-occurring psychiatric disorders. Prior to her doctoral studies, Christina was a Project Director at the New York State Psychiatric Institute, where she managed numerous large-scale research projects, including a validation study of DSM-5 alcohol, drug, and psychiatric disorders in the National Epidemiologic Survey on Alcohol and Related Conditions-III, a FDA-mandated validation study of a version of the Psychiatric Research Interview for Substance and Mental Disorders designed to assess DSM-5 opioid use disorder among chronic pain patients, and a longitudinal study of the reliability and validity of DSM-5 substance use disorder criteria in community and patient samples. Additionally, as a Study Coordinator and Counselor in the Columbia University Department of Psychiatry, Christina contributed to the development of a motivational interviewing-based brief technological intervention for alcohol and marijuana use and sexual risk behaviors among homeless young adults and oversaw the randomized controlled trial evaluating its feasibility and preliminary efficacy.

During her pre-doctoral training, Christina has evaluated the ways in which age and developmental stage differentially affect the relationship between substance use and sexual risk behavior among Black men who have sex with men at disproportionate risk for HIV. Her recent work examines the association between state laws and policies relevant to equality for sexual minorities and suicide attempts among LGBTQ adolescents in the Youth Risk Behavior Surveillance System. Christina plans to utilize a mixed-methods approach to examine the influence of state-level laws on consent and confidentiality in sexual health services on self-reported HIV testing among U.S. adolescents in her dissertation research. 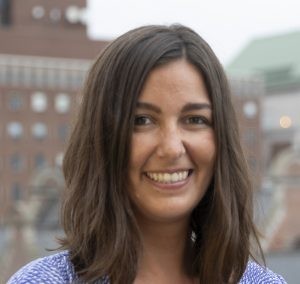